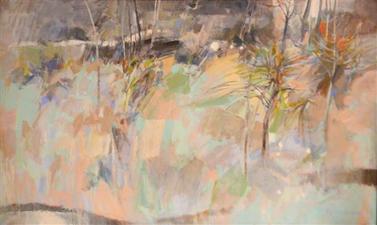 Paul Warren Zimmerman was an internationally known artist and professor emeritus of the Hartford Art School of the University of Hartford, Hartford, CT. Born April 29, 1921, in Toledo, Ohio, Paul was awarded a full scholarship to the John Herron Art School, graduating with honors in 1946. Under Heinrich Mayer, Director of the Hartford Art School, Zimmerman became Associate Professor of Painting in 1947. Throughout his extensive career, Paul received well over 86 awards in both regional and national exhibitions. He was also elected a member of the National Academy of Design. Bernard Hanson, former Dean of Hartford Art School, in writing about Zimmerman’s work states that, “Through his long association with Connecticut and New England, Paul Zimmerman has absorbed the spirit of transcendental pantheism which so strongly moved Emerson and the world around him. He deals with seemingly simple elements in his paintings, but in such combination that the paintings themselves are extremely complex ... he searches for a structure beneath the surface on which he can successfully construct a painting. He seeks to capture the reality beneath appearance.” His work can be seen in numerous museums, including the Slater Memorial Museum, Springfield Museum of Fine Arts, Pennsylvania Academy of Fine Arts, Wadsworth Atheneum Museum of Art, University of Notre Dame, Lehigh University and Houston Museum of Fine Art, as well as in many corporate and private collections.