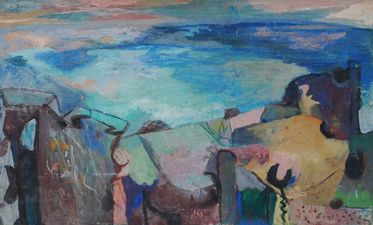 Morris Shulman was born in Savannah, Georgia, but spent most of his professional career in Manhattan. He studied with Hans Hofmann in 1948-49 and painted on Maine's Monhegan Island from about 1947 to 1965, spending summers on the island at a cabin he nicknamed "Mosquito Notch." Rocks & Sea is representative of his works from the period from the very late 1940s through the mid 1950s. There is a Rehn Gallery notation on the verso and they represented Shulman for several years during the early 1950s. Morris Shulman is very well listed, and his works can be found in the National Museum of American Art at the Smithsonian, the Metropolitan Museum, the Carnegie Museum, The Brooklyn Museum, the Jewish Museum, Bates College in Lewiston, Me, Vassar College, the Rose Art Museum of Brandeis College, among others.