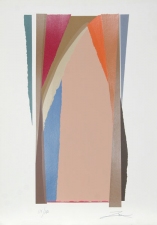 Larry Zox was an American painter and printmaker who is classified as an Abstract Expressionist, Color Field painter, and a Lyrical Abstractionist, although he did not readily use those categories for his work. Zox was born in Des Moines, Iowa but moved to New York City at an early age. Zox was considered an abstract artist, but more often he described himself as a colorist. He received his education at Oklahoma University and Drake University, and he studied with George Grosz at the Des Moines Art Center. He was awarded a Guggenheim Fellowship and received grants from the National Endowment for the Arts and the Adolph and Esther Gottlieb Foundation. He was Artist-in Residence at the University of North Carolina at Greensboro, Dartmouth College, and Yale University. His work has been exhibited in many one-person and group shows including the Whitney Museum of American Art, the Museum of Modern Art Albright-Knox Art Gallery (Buffalo, New York), Art Institute of Chicago, Museum of Fine Arts, Boston, and the Solomon R. Guggenheim Museum.
Loading...