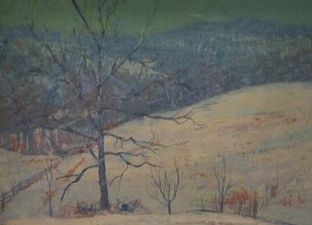 Known for decorative oil landscapes, John Macpherson was a native of Philadelphia and a student of the Pennsylvania Academy of Fine Arts. He married Beatrice Edgerly, artist and writer, and they built studios in Pennsylvania and Mystic, Connecticut, and helped organize the Mystic Art Association. In 1937, he opened a studio in Tucson, Arizona and later helped organize the Southern Arizona School of Art. Macpherson died in 1982 in Stroudsburg, Pennsylvania.