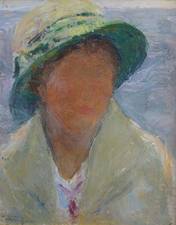 Very little is known of Jane Jarvis Mumford. Jane Jarvis Pearson was married to Captain Thomas Staniford Mumford who graduated from West Point in 1871. Jane was a miniature portraitist born in Baltimore who lived in France, Holland and England while she painted and stayed abreast of the war. Most of her clothing was hand made expressly for her in Paris and in London. She was educated and came from a wealthy background. The famous story about her is that she reversed the last two digits of her birthday (1879) to 1897 to make herself younger – as it was, she did not marry until she was nearly 40 which in those days would have made her a spinster. She came to Provincetown to study with Charles Hawthorne in 1915. She died in 1917. There is a collection of her miniatures on ivory from c. 1915 in the Indianapolis Museum of Art.