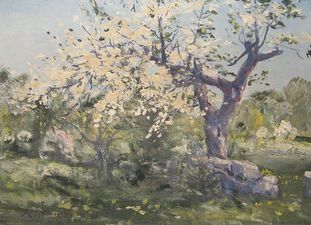 Henry Hammond Ahl was born in East Hartford, Connecticut and initially built a career as a Tonalist painter. Ahl studied at the Royal Academy in Munich and with Jean Leon Gerome at the Ecole des Beaux Arts in Paris. After settling in Boston in 1920, Henry Hammond Ahl became a noted impressionist landscape painter. He was a member of the American Artists Professional League, the Copley Society, the Salmagundi Club, and the Connecticut Academy of Fine Arts.