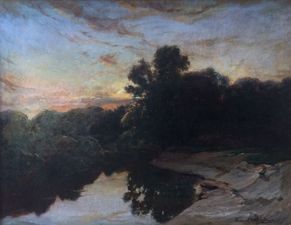 Born in Rome, Ohio, David Walkley became a successful New England landscape and marine painter and was also an acclaimed teacher in Pennsylvania and New York. Walkley studied at the Pennsylvania Academy of Fine Arts from 1867 to 1871 and at the Julian Academy in Paris with Boulanger and Lefebvre. In New York he attended the Art Students League and painted with William Merritt Chase. A prestigious honor, Walkley was elected into the Salmagundi Club in New York City. In 1902, he moved to Mystic, Connecticut from New London and helped found the Mystic Art Association. He also painted at Old Lyme, Connecticut. From 1879 to 1884, he was a teacher at the Pittsburgh School of Design and later taught at the Art Students League in New York.