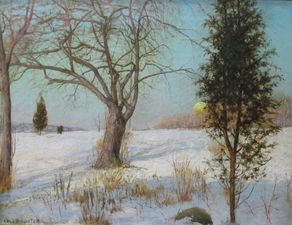 Charles Foster, the older brother of Ben Foster, was born on the 4th of July, 1850, in the small town of North Anson, Maine. Traveling to Paris in the 1870's, he became a pupil at the Ecole des Beaux Arts under Alexandre Cabanel, a popular instructor of the strictly "academic" school. He later entered the atelier of Louis Jacquesson de la Chevreuse in Paris while also becoming part of a group of American artist that included Charles Noel and Montague Flagg, Robert Brandegee, William Bailey Faxon and John Niemeyer. Upon his return to America he settled in Farmington, Connecticut where he spent the remainder of his life. Foster taught for a short time at the National Academy of Design and was also a member of the Connecticut Academy of Fine Art. While his work consisted primarily of landscapes, the artist also painted portraits, mountain scenes and animals. A memorial exhibition that included 30 of the artist's works was held in Hartford, Connecticut shortly after his death, which was in 1931. The catalog was warm in its praise of the artist: "Although thoroughly trained under the tradition on Ingres, Mr. Foster...painted principally landscapes, excelling in the treatment of skies, and from his studio he had every opportunity to study them, as well as the changing foliage of his beautiful surroundings." Willliam Bailey Faxon, one of his fellow students while in Paris, was also generous in appreciation of his friend: "Those who have had the pleasure of knowing Charles Foster, will, I am sure, treasure the memory of a true gentleman who was loyal and kindly, broad in his sympathies, modest, a searcher after the elusive truth which must be evident in his work shown in this Memorial Exhibition."