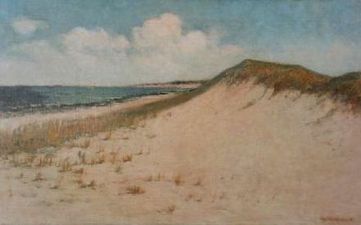 A popular and prolific painter during the early 20th century, Charles Cahoon became known for his serene landscapes and seascapes of Cape Cod. He was born in Harwich, Massachusetts to a father who was a sea captain and amateur artist and, as a youngster, Cahoon copied sketches of his father's. He also spent time at sea and did sketching from those experiences. He later studied photography in Boston and earned a living retouching photographs until he turned to painting full time in 1900. Charles Cahoon died in Harwich, Massachusetts in 1951.
Loading...