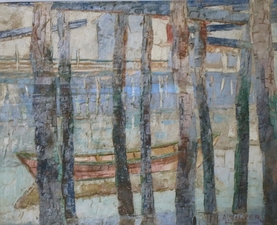 Andrew Winter (1892–1958) was an American artist best known for his landscape paintings on the coast of Maine, particularly his depictions of winter weather. Born in Sindi, Estonia as Andres Jüri Winter, he went to sea in 1913 on square riggers before sailing on American and British steamships as a mate during World War I. In 1921 he became an American citizen, and studied at the National Academy of Design in New York City. In 1925 he went to Paris and Rome to study on a traveling fellowship. He also studied at Charles Hawthone's Cape Cod School of Art in Provincetown, Massachusetts, and the Louis C. Tiffany Foundation in Oyster Bay, Long Island. After frequent visits to Monhegan Island off the Maine coast starting in the late 1920s, he and his wife, the artist Mary Taylor (1895–1970), settled there by 1940. He fished with the lobstermen and "painted Monhegan in all seasons, frequently rowing around the island in the worst of weather to capture scenes of the harshest seas and the most dramatic views of the cliffs and rocks. Winter was attracted to Monhegan's rocky coast, architecture, and the dramatic force of the ocean. The geometric strength, clear lighting, and absence of human presence in his landscapes have invited comparison to the work of his contemporary, Edward Hopper. Winter exhibited his paintings and won prizes at the National Academy, the Pennsylvania Academy of the Fine Arts, and the Salmagundi Club, and during his lifetime he also exhibited at the Corcoran Gallery of Art in Washington, D.C., the Currier Gallery of Art in Manchester, New Hampshire, and the Memorial Art Gallery in Rochester, New York.