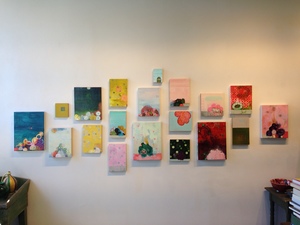 The exhibition's title, DOMINO, refers to both the classic board game and the idea of matching paintings end to end; each playing off one another both linearly and as an installation or matrix. The idea is that each work connects to the next by color, form, and image; so that each small painting stands alone as a singular work but is also part of a larger conversation, the WHOLE group of paintings involved in an active and organic dialogue. Sarah Lutz was born in Madison, Wisconsin in 1967 but lived most of her childhood in Vermont and Guatemala. She holds a B.S. in Studio Art from Skidmore College and an M.F.A. from The American University. Lutz was a Junior Teaching Fellow in Residence at Dartmouth College in 1994, and was awarded a 1-month residency at The Vermont Studio Center in 1996.