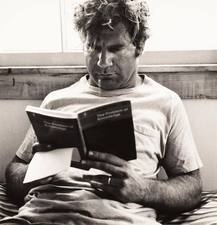 Gabriel Solomon "Gandy" Brodie was born in New York City and grew up in the tenements on the Lower East Side. Essentially a self taught artist, Brodie was deeply impressed by the work of Van Gogh, Picasso, Klee, Soutine, and Mondrian; all who had an influence on his singular “expressionist” style. He rose to prominence in the mid-1950’s as his work was included in important group exhibitions at the Kootz Gallery in 1953 and 1954 and at the Stable Gallery in 1954, 1957, and 1959. Between 1954 and 1961 his work was also included in a number of annual and biennial exhibitions at the Whitney Museum Of American Art. The Phillips Collection, the Whitney Museum of American Art, the Metropolitan Museum of Art, and the Museum of Modern Art all hold work by Gandy Brodie in their permanent collections, and artists from Hans Hofmann to Willem de Kooning had paintings of Brodie’s in their personal collections.
Writing in The New York Times, critic Grace Glueck observed that “ Brodie reveled in the materiality of paint, stroking or palette-knifing it on in thick, rich impastos to form a surface that turns the viewer's eye into an organ of touch”, and the paintings in this exhibition are quintessential examples of Brodie’s powerfully accreted surfaces. It is as if he could best discover the emotional life of things, and by implication his apprehension of the world itself, by first embedding them deeply, and then, by turns, coaxing them out. The great art historian, Meyer Shapiro, was a particular champion of Brodie’s work, and he observed the following, "Characteristic of Gandy and most essential in his self-awareness as well as in his vision of nature was his haunted sense of the fragility and solitude of living things. In fidelity to those feelings and to a poetic attraction, he painted the little bird, the eggs in the nest, the fallen branch, the wilted flower, in a long patient effort to realize their mysterious qualities through a painted surface as material and as exposed to time as the objects themselves. Very early when I first met him he yearned for the noble in art as a model of self-transcendence. Of this personal goal his art, I believe, is a true fulfillment."